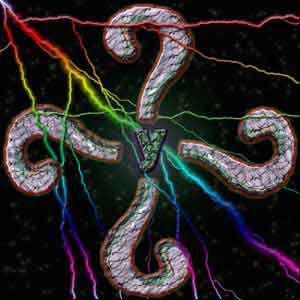 Qwestion is a thrash metal band that has released a primarily instrumental CD called "Y". The group belts out a continuous barrage of crunching, metallic rhythms and aggressive riffs that form the backbone of the music. The statement implicit in the album is essentially aggression with reckless abandon. The album is mostly instrumental, centering on the guitar work of John Hall. Hall's playing is polished and tight within the instrumental arrangements and he has no inhibitions to indulge in thrash metal guitar tones. Though credit is due for the tidy playing, fans of progressive music may be disappointed at the brevity of the guitar soloing, depth of the instrumental compositions, and the sometimes monotonous, oppressive rhythms. But, that being said, fans of thrash metal who may be willing to overlook these loftier ambitions may take an interest in this relentlessly driving instrumental onslaught.

Overall, I found this CD interesting in the regard that it was primarily instrumental which seemed somewhat unusual for the brand of thrash metal that is embraced on the album. The musical content did have some interesting rhythms and ideas, but not to the extent that is typically expected from instrumental music of the neoclassical, progressive, and fusion domains.

It should be noted that due to some profanity at the end of the CD, this album has a parental advisory for this explicit content.