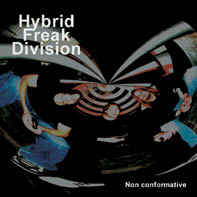 What comes to mind when you hear the name Hybrid Freak Division? My initial thought, as many people would think, is that this is no ordinary band. As it turns out, it is like calling a spade a spade as it were. They are anything but normal.

Here is the definition of each word as found in the dictionary:

Division-Distribution, part of a whole, disagreement, process of finding out how many times one number is contained in another.

Put that all together and you have what Fredrik Andersson (guitar), Pär Laurén (bass) and Björn Ny (drums) are, a Hybrid Freak Division. This is a trio of magnificent musicians. It may sound confusing, but it all becomes clear once you hear their music.

The title of their album says it all…Non Conformative. Not only is the name of the band brilliant, so is the title of the album. I have to say it right off the bat; I loved this album from start to finish. This CD is full of the kind of improvisational instrumental bliss that is to die for, and I mean that. I heard literally every genre that I enjoy in this music. In a word, they do not conform to any standard or pattern when they assemble their music.

On a concrete base of jazz, the rest of this musical monument is built, and with the care and precision of union mason. From the center of the jazz core, layers of rock, blues, and some surf, which may even surprise the band that I mentioned that, arrive melded into a definitive and focused creation of improvised fusion. I notice in most of the tracks there were parts that sounded like they needed to be in a much faster tempo, but your ears adjust and you begin to realize what is going on. The tunes were indeed, slowed down intentionally. Playing music in odd time signatures is one of the earmarks of progressive music, and jazz was the genus that started it all. This approach creates an effect that forces you to pay attention to every twist and turn going on in the song. It works, because I really did notice of a lot idiosyncrasies within each composition, which I would not have if it were in normal time.

File this CD under progressive rock-jazz and stick it in between your King Crimson and Frank Zappa CDs.